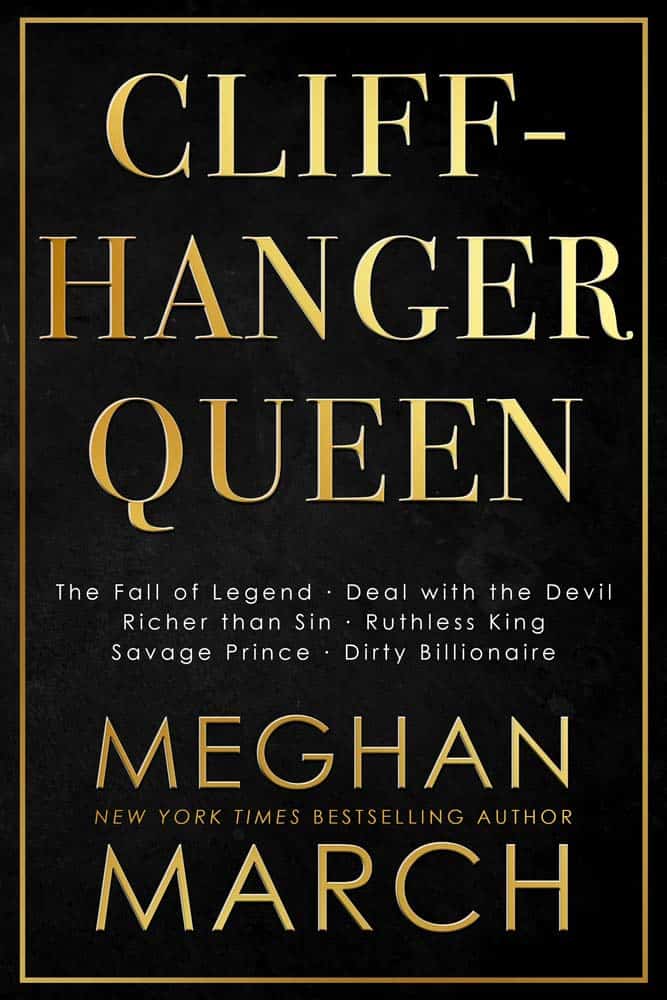 New York Times bestselling author Meghan March did not set out to become the “Queen of Cliffhangers” when she began writing romance, but her readers awarded her the title when she released one jaw-dropping cliffhanger after another. As an homage to her love for her readers and the designation they bestowed upon her, she has created a collection unlike any other in Cliffhanger Queen.

For the first time ever, readers can now download all six of the first books of Meghan March’s epic trilogies under one cover.

Inside Cliffhanger Queen, you will find romance at its finest—six amazing alpha heroes who are brought to their knees by the love of strong women:

The Fall of Legend: Club owner Gabriel Legend has been fighting his way out of his rough beginnings on the streets for years, a path he certainly never expected to lead him to the greatest temptation of his life: Scarlett Priest, a society princess holding court on Fifth Avenue. She’s so far out of his league that they never should have met… but sometimes fate has other plans. Will Legend survive the fall?

Deal with the Devil: A ruthless, modern-day pirate of a CEO, Jericho Forge prefers the deck of his ships to dry land—and he always plays to win, no matter the game. His latest pawn is poker phenom India Baptiste, whose life he takes by storm, talking her into a deal with a devil—trading her freedom for something even more precious. But India doesn’t realize Jericho is holding an unbeatable hand and never shares everything he knows. Forge receives his own surprise as India upends his perfectly ordered billionaire lifestyle and has him throwing all his rules out the window. Only love can triumph in this epic adventure that unfolds across Europe and the high seas.

Richer Than Sin: A small town, second chances, and star-crossed lovers collide in this high-stakes family drama where the heir to a billion-dollar timber empire is determined to win the heart of the daughter of his family’s sworn enemy. Whitney Gable is the one who got away ten years ago—after Lincoln objected on her wedding day! Sparks fly when she arrives back in town, broke and without a ring on her finger. Can a Riscoff and a Gable ever find true happiness together?

Ruthless King: Lachlan Mount is the king of New Orleans’ criminal underworld, and as such, the entire city bows to him. The owner of a struggling whiskey distillery has no idea that her dead husband left her indebted to the most terrifying man in town. Mount always gets what he wants… but there is no end to the twists in this dark and gritty show-stopping story. Once and for all, we will finally learn the truth: can ruthless kings have a heart of gold?

Savage Prince: A mysterious stranger appears to help Temperance Ransom out of an unthinkable situation, but his identity is even more unthinkable. Twists, turns, and heart-stopping questions will keep you on the edge of your seat until the very last page!

Dirty Billionaire: Creighton Karas, a classic alpha-hole billionaire hero, learns the truth about the price of love when he finally meets the one woman he can’t buy. Holly Wix isn’t afraid to walk away from everything he brings to the table, until he finally offers up his heart!

The Runaways are my 100% positive vibe tribe of romance-readers. Have questions about my books or current projects? Here’s the place to ask! When I need help naming characters? You’re the first people I’m going to ask.