Previous Next
BTS: Beneath This Ink
NEWSLETTERS

BTS: Beneath This Ink

This book came to life purely because the Universe wanted it to. Instead of spending the six weeks between quitting my law firm job and starting my in-house lawyer job writing Beneath This Ink, in its entirety with the most free time I’d had as an adult as I planned, I filed for divorce. That I really hadn’t planned on. Probably no one who was involved in the situation would believe that, but it’s the truth. I was going to keep on carrying on with the toxic marriage I was living in. But then… there was a straw that broke the camel’s back—something small—and I just snapped. I couldn’t keep going. I was done. If you read the behind-the-scenes of Dirty Billionaire, you already got some of the story. I spent that time I was supposed to be writing Beneath This Ink filing for divorce, getting drunk on a beach in the tropics for 8 days, and then going back to pick up the pieces of my life that I’d just willingly dynamited. Needless to say, I wasn’t exactly in the best shape to be writing romance. In fact, I no longer believed in love—at least, not as it applied to me. I’d gone all in. I’d believed. I’d tried everything to make it work. And I’d failed.

My entire view of life was shattered. I wasn’t the same person anymore. And no matter how hard I tried, I couldn’t write this book. I could barely think about the story. It was a rough time in my life, to say the least. But the best part about writing fiction, if you’ve never done it before, is that you can use your books to sort out all sorts of personal issues. I’ve been doing it for years. People have no idea how well they know me or my struggles, because they can’t tell fact from fiction. I can though. And those books… well, they’re healing. They’re healing in a way I never realized until much later.

In fact, I don’t think I would’ve survived that part of my life with my optimism and zest for life intact, without writing romance. This book saved me. It saved me when I didn’t believe in love and walked away from the keyboard. But it was still waiting for me when I was ready to start again. Con and Vanessa never let me down. They were there for me during a time in my life when I had very few people I could lean on emotionally, and those fictional characters were some of the biggest supports I had.

As I healed, Con and Vanessa healed. They fought their battles and their demons, overcoming everything keeping them apart. They helped me believe that love was possible again, because I saw it in them.

I’ll never forget the long weekend I decided that it was just time. I was finishing this story, come hell or high water. It was the third book I’d written, but it was the first time I started plotting the way I continued to do so for 36 more books. I had this little red leather notebook—one of those smaller ones with the elastic strap, and I sat on my bed in that rental house and the rest of the story just poured out of me, scene by scene, one piece after another. Dialogue, movement, the spaghetti… It all just poured out. Like it had been waiting for me to tap in. It was the first time I really worked with creative flow and let the flow do the work for me. It was beautiful.

Me and creative flow… we just went for it. My hands ached for nearly a week afterward. I hit my all-time highest word count, putting down 12,000 words in one day. I barely left my bed, except for me and Brooklyn to go to the bathroom and eat occasionally.

Con and Vanessa came to life… and I came back to life. I started to believe in myself again. My self-esteem, which had been decimated in my marriage, was restored. I started to really learn to love myself for the first time in a long time. And I know I didn’t do it alone. Con and Vanessa were with me every step of the way, including the day my divorce was final—and the book still wasn’t finished.

I had extremely low expectations for this book when it was released. I thought it was going to be the last book of the Beneath series since I’d had such high hopes for Beneath This Mask, but its release and subsequent sales were… well, total flops. Smart money told me not even to write Beneath This Ink, but I had to. Something inside me wouldn’t let me not tell that story. I loved it too much to let it go without bringing it to life. So, I did. And I got wonderful yet tough critiques, and I did all the work necessary to make it the best story it could possibly be. Then I released it, and I let it go. I let it fly. I didn’t worry about the rank or the sales. I celebrated with joy when I hit my goal of selling 100 books in one day. I was ecstatic when I hit my other goal of reaching the Amazon Top 1000 (not 100—1000). And then I was absolutely gob-smacked when it started selling 1000 copies per hour a week later. I cried tears of joy as I watched my seemingly-far off dream of becoming a USA Today bestselling author come true a week after that. A month later, I had six figures in my bank account, a whole new career, and a new life unfolding before me.

It was unreal. Surreal. Wild. Insane. Crazy. The best possible change of circumstances that I never could have imagined or planned. Ever. It was… awe-inspiring.

And I got there by following my heart. By chasing my dream, loving myself, rebuilding my self-esteem, and finishing what I started, even when it was hard and I didn’t know if I’d ever be able to write “The End” of another romance novel. But I did it. I did the hard things. I grew. I learned. I believed that there was something better ahead for me, eventually.

And, man, life delivered in a big way.

Sitting here, I can tell you with absolute certainty that in 2015 when I published Beneath This Ink, I had no idea life could get this good. I never would have believed someone if they’d told me where my life was headed. Back then, I couldn’t imagine all this. I didn’t know where I was going on the road of life or what the journey would be like. All I have to say today is: Thank you. Thank you, God and the Universe, for this life of mine. It has not been easy, but it has been worth it. So worth it. The only thing I would change is to appreciate everything more, even the challenging times. Because those challenging times have always led me to an even more beautiful life, every single time.

I hope you love Con and Vanessa if you haven’t already met them. They’re two of my most favorite characters I’ve ever written. They changed my life in more ways than I will probably ever be able to express, and I love them dearly. For everyone who has already loved them and took part in that dream back when it was initially coming true: THANK YOU. You have no idea how amazing you are.

BEHIND THE SCENES: FUN FACT 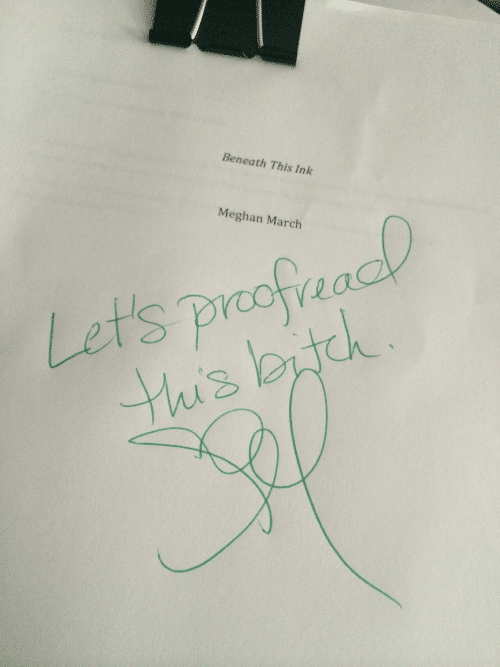 Beneath This Ink was the first book I’ve ever worked on published with the title it had since day one. My working titles are usually completely unfit for public consumption.

WHAT READERS ARE SAYING…

“Vanessa and Con were a power couple and I worshipped their enemies-to-lovers-but-they-were-actually-pining-for-each other-the-whole-time dynamic! I also loved that they knew each other since high school and the development was chefs kiss.”

“This book was sweet, sexy angsty, full of twists and turns, suspenseful, and had one tatted bad boy who will make you swoon… HARD!”