Behind the Scenes: Dirty Billionaire Trilogy

The memory of writing the original synopsis of Dirty Billionaire is still emblazoned in my mind in vivid, living color. I was drunk on Coco Loco in the Dominican Republic, where I had run away 36 hours after filing for divorce after almost 11 years of marriage.

It wasn’t a good marriage. I was young and stupid, but thought I knew everything and yet still had so much to learn. I’m sure many of you can relate.

Sitting on that bed in the Secrets Dominican Republic resort, drunk, in my bathing suit, wrapped in a towel, Creighton Karas stormed into my mind. He had no name at that point, he was simply an energy. A full-blown, fully-formed, real man who had something to say and a story to be told.

He was an asshole. One hundred percent. But I wasn’t really enamored with men at that point in my life, so I didn’t care. Asshole? Sure. I wasn’t interested in anything with a penis, but I could sure write about one.

I don’t know why he came into my life, but he was there, and he was real. It was September 2014. I wrote that blurb, the one I used when I published the book in December 2015, in one go. That’s how I write a lot of my most powerful blurbs. I just… let it flow. It doesn’t come from me as much as it comes through me. I don’t have complete control over the words that spill onto the pages, at that moment, or any time I’m really deep in connection with creative flow.

Back then, I didn’t know or think about what I was doing, I just… wrote what came. Because it was powerful. It was more than something I could come up with by myself. It was… a force bigger than me, bringing something to life through me.

Whatever you think about Creighton or his story, it began in a place of pain for me. A time that I now describe as me pulling the pin on the grenade that was my life and walking away while letting everything explode behind me.

I really did that.

It was insane. It was wild. It was crazy. It probably seemed selfish to those watching from the outside, but at its core, it was an act of self-preservation. I had to save myself from a life that I’d become so deeply entrenched in that could never make me happy or take me where I knew I needed to go in life, even if that destination was a mystery still. I had reached that place where I had to go it alone, for the first time in 14 years, and I had no idea what the hell I was doing. I blocked out the guilt of everyone I was hurting and I stayed drunk on that beach in the Dominican for eight days, trying to figure out who that voice was that came through me and what to do with it. It was easier than focusing on my own problems, and perhaps, exactly what I needed to do in order to heal.

I wouldn’t finish the trilogy and get it to the point where it was publishable for nearly a year.

The craziest part, looking back now, is that by the time I was going through the edits on the trilogy, I had fallen head-first, ass over tea kettle, in love again. Even after I didn’t think I would ever find love again and didn’t believe in love as it particularly related to me for a time, the Universe delivered me something I could never have imagined while sitting drunk on that beach.

I finished those edits for the last book of the trilogy while on vacation in Belize, with my supermodel boyfriend who thought I was the best thing to ever exist, and together, we were finding a home to live in so I could experience the adventure my heart and soul was set on—living on the beach in the tropics as an expat.

Writing the Dirty Billionaire trilogy was a huge milestone in my life. Not only because it took me from a black, deadened heart to one that hoped and believed in love again, but also because I followed my gut when everyone else told me not to do it.

But I didn’t listen.

I followed my gut, and it led me to something awesome, even if it’s the only story I would never let my mom read because it was just too dirty.

That trilogy paved the way for some of the best experiences in my life.

See, I totally thought the Dirty Billionaire Trilogy was going to be the thing that made my career. I thought it would be my break-out work. My extremely successful and very wise mentor at the time also believed it would be the thing.

We were both wrong. I actually shelved the first draft of the Dirty Billionaire Trilogy, almost completely written, to finish Beneath This Ink and Con’s story. I knew in my heart of hearts that Dirty Billionaire would be my ticket to success. But… Con’s story called to me, and I just had to finish it and I couldn’t keep writing both at the same time, because they were in two different tenses and it was just too hard on my brain to switch back and forth in the limited amount of writing time I had. I put Creighton aside for a time and finished Con’s story. And then Con became the thing and Beneath This Ink gave me a career and the opportunity to quit my job as a lawyer to write full time. More on that one another time. It’s got its own great behind-the-scenes story, as they all do.

The morals of this story: Sometimes when things appear to be falling apart, they’re really just coming together to build a foundation for something even more amazing, even if it doesn’t look like it. Also, sometimes, on the other side of pain is a whole lot of awesome. We just have to be brave enough to walk through the darkness and trust that things are coming together in our best interest, somehow, some way, even if it doesn’t look like it at all in the present moment.

This story was born during one of the hardest times of my life, during massive upheaval and change. That upheaval and change rears its head every so often, and now, I just try to breathe, pray, and believe that I’m going to make it through the storm to the sunshine on the other side eventually. And you know what, I always do.

Here’s wishing you an amazing day, filled with love, hope, faith, and a whole lot of sunshine in your life.

PS. Creighton Karas wasn’t even Creighton Karas when I wrote the first draft! He was Malcolm Karas, but then another author wrote a billionaire asshole book and used the name Malcolm. She was a MAJOR bestseller (while I was still a nobody), and I didn’t want to look like a copycat. So, I changed his name. And where did the name Creighton come from? My brother’s high school best friend (who took me to prom when I was 16, with no funny business) went to Creighton University. I always loved the name, and when Malcolm was taken, it was the perfect opportunity to use it. Just another example of things working out for the best! Creighton was meant to be Creighton. Not Malcolm. Thank you, Katy Evans! You did me a huge favor! 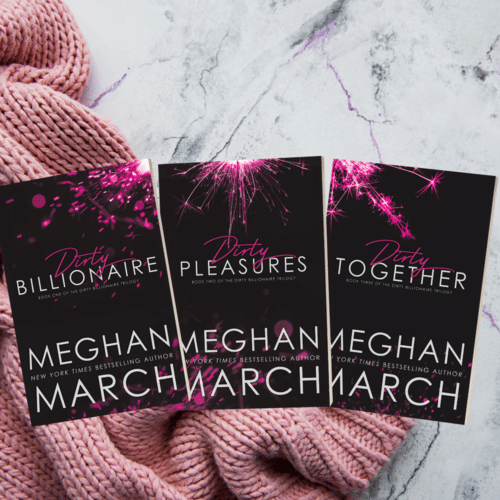