This particular section was written after I’d really messed up an afternoon with some still hanging-on remnants of my slide into negativity. I was fed up with myself because I could see the damage I’d caused. I’d lowered the vibration in our house dramatically through my own words and reactions. I was determined never to do that again. It just wasn’t worth it. I wanted peace, harmony, and love in my home—not angry words, frustration, and negativity.  And I sure didn’t want to be the one causing it.

We’re all growing, learning, evolving, and raising our consciousness through trial and error on Earth. Don’t forget to give yourself grace. And never, ever forget the power of positivity.

Excerpt from A Creative Rebel’s Guide to Winning the Game of Life:

Anyone can be negative. Anyone. It’s easy, it’s cheap, and it takes no effort. Positivity, on the other hand, takes strength. It’s not always easy. Sometimes it feels downright near impossible, but then you find something to grasp onto as a silver lining in a dark cloud.

Positivity isn’t cheap. It’s expensive because it takes effort. Not everyone seems to be able to manage a positive attitude, but those who can—and especially those who have cultivated one out of the depths of a formerly negative self—know the truth:

A positive attitude is one of the most valuable traits a person can possess.

Once upon a time, I had a relentlessly positive attitude. It was literally bred into me by my parents, who both read self-help books like Success Through a Positive Mental Attitude and The Power of Positive Thinking before I was even born.

I had no idea a positive attitude was such an asset. Everything just seemed to go pretty right in my life, and I achieved every goal I set.

And then one day, I lost the relentless part of my positivity. I let negativity slip inside the gates. The gold that had been groomed into me slipped right out of my hands because I didn’t know what I had in my possession before that moment. I didn’t realize how valuable a relentlessly positive, can-do attitude was. I literally didn’t know there was another way to go through life.

Until I let negativity grow. It was easy. It took nothing to find things to complain about or point out that were going wrong. The longer I did it, the more all-encompassing of a habit it became. Until at one point, positivity was essentially dead in my life. Instead of all the solutions that used to easily come to my mind when faced with an obstacle, I could only tell anyone who would listen about why whatever I was worrying about wasn’t going to work or how hard it was or how much stress I was under.

But they all led me to a very important moment, the moment I finally realized exactly how valuable a positive attitude was. It’s worth a lot more than most people know, because they’ve never lost one and had to go back on the path to regaining it.

It takes not being scared to be someone new around the people in your life who have grown to expect certain responses from you. It takes strength, and you have that inside you.

But the best part is that you can change the program at any moment. You just have to decide you want to, and then start doing it.

Don’t worry about messing up and falling back into your old negative habits. If it happens, no big deal. Catch yourself and go back to being positive. It gets easier in time.

Your life will change. Solutions appear more quickly, more easily, and more creatively. And then eventually, being positive is so ingrained that you don’t even think about it anymore. Positivity is part of who you are. It’s how you view life. It’s part of the story you tell yourself about yourself. It’s part of your consciousness. It becomes who you are.

Positivity is power. Never doubt it.

If you want some more awesome books to read to bolster your commitment to positivity and learn about why it’s so powerful, here are two of my personal favorites from the 1950s (and 1960s) out of my dad’s self-help book collection. As always, take what resonates with you and leave the rest 😊 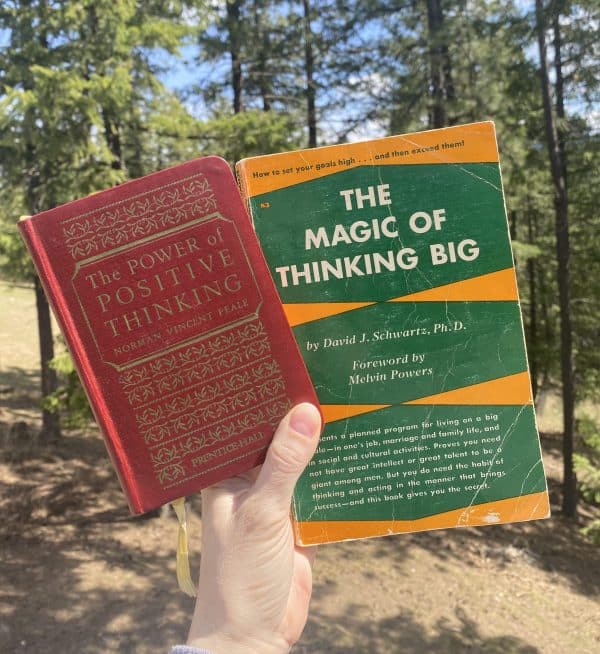 The Power of Positive Thinking
by Norman Vincent Peale

The Power of Positive Thinking is unparalleled in its extraordinary capacity for restoring the faltering faith of millions. This book will show you how you can deal more effectively with tough situations and difficult people, and dramatically improve your performance and confidence. You will learn:

• How to eliminate that most devastating handicap—self doubt

• How to free yourself from worry, stress and resentment

With inspiring examples and anecdotes, the book successfully delivers stimulating ideas and practical techniques to adopt optimism and live a victorious life. The Power of Positive Thinking is a phenomenal bestseller that has inspired millions of people across the world.

The Power of Positive Thinking

The Magic of Thinking Big
by David J. Schwartz

(loved this in audio!)

Millions of people throughout the world have improved their lives using The Magic of Thinking Big. Dr. David J. Schwartz, long regarded as one of the foremost experts on motivation, will help you sell better, manage better, earn more money, and—most important of all—find greater happiness and peace of mind.

The Magic of Thinking Big gives you useful methods, not empty promises. Dr. Schwartz presents a carefully designed program for getting the most out of your job, your marriage and family life, and your community. He proves that you don’t need to be an intellectual or have innate talent to attain great success and satisfaction—but you do need to learn and understand the habit of thinking and behaving in ways that will get you there. This book gives you those secrets!

The Magic of Thinking Big

Success Through a Positive Mental Attitude
by Napoleon Hill and W. Clement Stone

(I haven’t finished this one yet, and thank you to the lovely reader who sent me this bookmark) 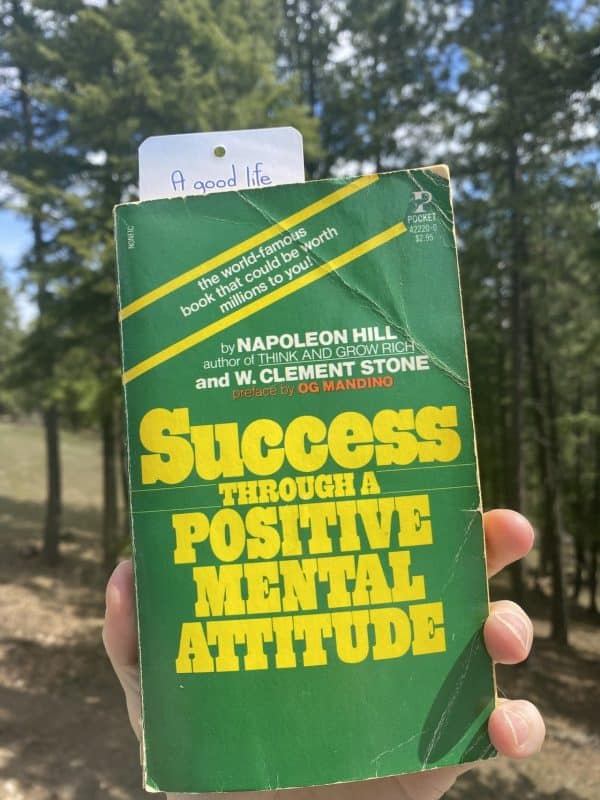 Your success, health, happiness, and wealth depend on how you make up your mind!

When motivational pioneer Napoleon Hill and millionaire CEO W. Clement Stone teamed up to form one of the most remarkable partnerships of all time, the result was Success Through a Positive Mental Attitude, the phenomenon that proposed to the world that with the right attitude, anyone can achieve his or her dreams.

Now this remarkable book is available for the twenty-first century. You, too, can take advantage of the program that has brought success to generations of people seeking — and finding — a better way to live.