Previous Next
The Mount Trilogy
NEWSLETTERS

Mount has been making waves in my mind for the last six or seven months. He’s had a lot to say about the plot hole I left behind, and I’ve been listening to him. Some characters are much more than characters. They’re real in their own unique way. Mount is one of those. He came to me fully formed, on a coke-fueled night, in a third-world country where every day of my life was an adventure. While I stay far, far away from cocaine these days (thanks, Fentanyl for making it stupidly deadly to the point where no sane person would ever want to touch it again), Mount is still one of my companions. What does that mean for all my Mount lovers out there? Only time will tell. I may have written some words though… We’ll see how it shapes up. I already know how the story begins and how it ends. It’s just everything else in the middle I’m not certain about yet. This means I’ll do what I do best: let it simmer and see what develops.

If you haven’t met Mount and Keira yet, I’m here to tell you that this trilogy is one heck of a wild ride. Fair warning: It’s the darkest story I’ve ever written, but I loved it so much. I loved Keira so much. I think she’s the strongest heroine I’ve ever had the privilege to live through—even stronger than Magnolia. In order to be the consort to a ruthless king and rise above the challenges life sent her way, she had to become a completely new version of herself. Stronger. Wiser. But also, more vulnerable. It’s a paradox, to be sure. She was my first New York Times bestseller in Defiant Queen, and I will never forget how writing this trilogy changed my life. I believe it was fated. This story was meant for me. It changed me. And after I wrote it, I started down the road to becoming a completely new version of myself. Without Keira’s influence, I don’t know if I would’ve had the courage, fortitude, and perseverance to keep walking through that dark night of the soul that seemed like it was never going to end. But it did, and like Keira, I emerged anew.

No one can ever tell me that books aren’t magic. I know they are for a fact. I feel it when I read them, and I know it when I write them. The Mount Trilogy is no exception. It will take you places and transport you into a completely foreign world where the rules are whatever Mount says they are. He didn’t become the king of the criminal underworld of New Orleans for no reason. That was fated too.

If you’ve already enjoyed The Mount Trilogy, we’d love it if you wanted to share it with your book-loving besties. Either way—we are so grateful for you! Thank you for being part of my journey and being awesome. You have no idea how much I appreciate you or how often I pray for life to bless you with its very best.

GET YOUR COPY TODAY! 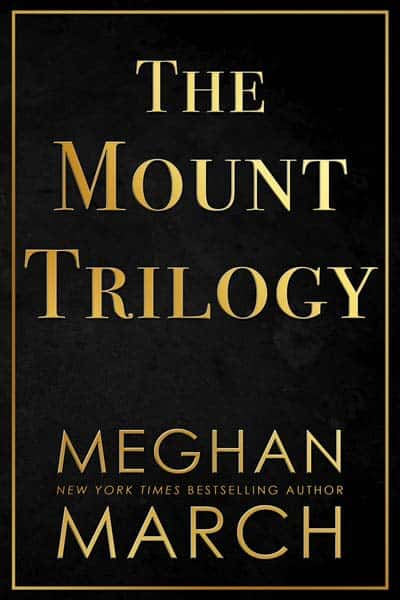 About The Mount Trilogy

New York Times bestselling author Meghan March brings you the complete Mount Trilogy under one cover—a must-read for those who love dark and gritty stories where love triumphs over all odds. Lachlan Mount lives in the shadows, ruling New Orleans’ criminal underworld with an iron fist. He’s nothing but a shadowy legend to Keira Kilgore until he appears to collect a shocking half-million-dollar debt racked up by her dead husband. Mount doesn’t care about the money—he wants her instead. But Keira is strong—she’ll never surrender or break under his dark stare. She stands her ground in hopes of making it out of this bargain with her heart and soul intact. But Mount has other plans . . .her debt will be paid only one way in the end—with her heart.

BEHIND THE SCENES: FUN FACT

Did you know The Mount Trilogy may never have existed but for a trip to Dublin? We all need to thank Amy Daws for that! She planned the trip – and I crashed it – and we toured the Teeling Whiskey Distillery and it got my plotting brain going like CRAZYYY. By the time we left Dublin and headed to Barcelona, Seven Sinners had already been born in my head! It took a little longer for the rest of the pieces to come together, but the seeds were planted in June of 2016!! I didn’t start writing it for almost another YEAR.

WHAT READERS ARE SAYING…

“The Mount Trilogy by Meghan March concludes with the explosive, emotional, and sexy as sin, SINFUL EMPIRE! This right here is the happily ever after you’ve been waiting for and Ms. March couldn’t have done it any better!”

“Meghan March pulls you into the dark gritty belly of the underworld of New Orleans in this heart-stopping addictive series that will stay with you long after the last page.”

“This right here…THIS is the type of romance that I LIVE FOR! Brutally beautiful and one of the SEXIEST reads of the year! Meghan March is CONQUERING this genre!”