Previous Next
The Truth Behind the Fiction
NEWSLETTERS

The Truth Behind the Fiction

Oh my goodness. Last night, Jake and I were talking about Redemption, doing our plotting thing, and my husband blew my mind.

I tossed out a general concept of an idea, something I knew needed to happen during the story, and he picked that ball up and scored a slam dunk.

Over twelve hours later, I’m still amazed by the magic we came up with.

Here’s the truth behind the fiction: None of these books would happen without me. I’m the catalyst, the idea generator, the one who stews for years on these stories, and most importantly, I’m the workhorse. I’m the one who writes every page. I feel the story and translate it into words so it can be shared with you. But here’s the other part of the truth: I don’t do any of this alone.

These stories may start out as my ideas—the whole framework of it, the characters, and so many of the moments—but by the time it’s done, I see Jake’s stamp all over it.

Do you remember everyone’s favorite scene from the Forge Trilogy? The one that included those hilarious words, “release the kraken?” That wasn’t my idea. It was all Jake. He envisioned that whole scene, complete with the memorable full-frontal nudity, and I translated it into words and made the scene what it became.

Jake and I are a team. He hasn’t always been the one who helped me, but he’s been with me now for over 30 books. I couldn’t do this stuff the way I do it without him. He’s an indelible part of #MarchMagic. There are moments, like last night, and a few nights before when I just stare at him in awe as he plucks the most incredible ideas out of creative flow and hands them to me like precious treasures. Together, we’re making the most amazing magic with this story.

Mount would never have been who he is without Jake’s influence. He’s the one who lives inside Mount’s head with me and has since 2017. He understands Mount in ways that I sometimes cannot at first, because I’ve never been a man living on the wrong side of the law with his own code of morals and ethics. But once upon a time, Jake was exactly that kind of man.

Last night, I told him that I never could’ve written Mount without him. I wouldn’t have even conceived him as a character. I know it’s the gospel truth. Mount wouldn’t exist without Jake. And there is no question that Mount has changed us both. We’ve grown with him. We’ve loved with him. We’ve watched him change and evolve. It’s been a wild ride since he came into our life, and I am so excited to spend the next couple of months in his world and his mind, bringing this entire epic story to life. It’s freaking incredible. I’ve never written anything with this depth or emotion or with this utter brilliance of a plot.

I told Jake last night, “They’re all going to think I’m a genius after this.”

But here’s the full truth: The credit doesn’t belong to me alone. It never has. I’ve always only been one part of the equation when it comes to bringing these stories to life. They may not happen without me, but without the brilliance I’m gifted from those who help me, they would never become what they are.

So, here’s to Jake—not just my husband, soulmate, and the love of my life—but also a true creative genius. I have absolutely loved watching his evolution into the best plotting partner I could have ever possibly asked to be gifted. I am so blessed to have the privilege to create this magic with him.

And you, my dear friends, will be the beneficiaries of our hard work, long hours, and constant dedication to the best stories and books we can possibly create for you. I can’t wait to share Redemption with you. It’s absolutely incredible. By far the best work I’ve ever done, and I’m only partway through the book. But as a creator, there are some things you just know. If I can create like this for the rest of my life, I’ll consider myself to be one of the luckiest storytellers alive. This is the gift I’m most grateful for this holiday season—to be myself and do what I do, with a man I love beyond anything I ever knew was possible. We’re living our own happily ever after, and I can’t wait to share our magic with you. It’s going to be unforgettable.

Cheers to everything that lies ahead, including stories so epic I had no idea I could be the one to write them. Also, massive thanks to Lachlan Mount. I have no idea why you picked me, but it’s a privilege to share your story with the world.

ADD REDEMPTION TO YOUR GOODREADS TBR! 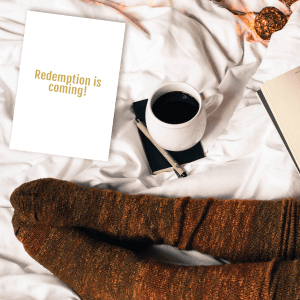 My daughter was kidnapped.
My sanctuary violated.
My best friend murdered.
My empire is crumbling before my very eyes.
There’s no retirement plan for the boogeyman.
I never cared about that before.
Now that I have a family, everything is different.
I can never put my daughter at risk again.
I don’t want this life for her.
But I can’t undo the things that I’ve done.
I can’t bring back the lives I’ve taken.
Everyone knows Lachlan Mount doesn’t deserve a second chance.
But maybe—just maybe—a man like me can still find redemption.